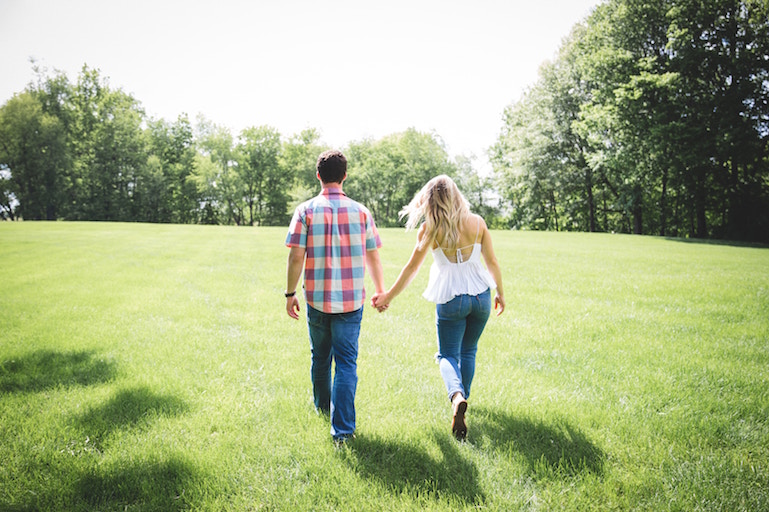 You laugh together. You share intimate secrets. You know each other’s favorite ice cream flavor. But are these signs he sees a future with you?

In short, the days are brighter, the nights are warmer and everything is wonderful but you can’t help yourself from wondering where this is all going. Does he see a future with you or is he just having fun?

It can be daunting to outright ask whether or not a man is interested in a long-term relationship and you may feel that doing so will scare away a person who has potential. So, how do you avoid having the scary relationship talk when you can’t read his mind?

Easy. You look for tell-tale signs that he sees a future with you.

It’s the closest thing we’ve got to reading his mind so keep your eye out for these 7 behavioral hints – they’ll  clue you in on his intentions and where he sees the relationship headed.

After the initial stages of a relationship have moved into more comfortable territory, men who see long-term potential in you will express interest in your daily goings on of your life.

Even men who find it difficult to communicate on the phone will at least put forth an effort to know what happens in your life during the times he is not with you.

A man who expresses interest in your everyday moods and activities is also indicating that he wants to know more about you apart from the person you show yourself to be on your dates.

If he’s planning to spend a good deal of time with you in his future, it’s natural he’ll want to know what kind of person you are on a day-to-day basis.

In the beginning stages of dating, you may have spent a lot of time telling each other anecdotes about your pasts and sharing information about the present.

But what about the future? Have you discussed your future plans with each other?

If your man asks you questions about various interests of yours and what you plan to do with them, gauge his reaction closely when you give your response. If he’s interested in you long-term, he’s probably trying to learn more about where you’re headed in the future to see how it could coincide with his own plans.

He invests in you and encourages you to invest in yourself

Also, it’s important to note if he encourages you to pursue your ideal of yourself. Does he gently push you to go to school for learning something it’s been a goal of yours? Does he spend his time researching how you could accomplish that new goal of yours? These are all important indicators he plans on sticking around for awhile.

He factors you into his decisions and long-term plans

This one is a huge indication of whether he sees a future with you. If he naturally factors you and your preferences into his decisions, you can pretty much rest assured the man sees a future in this relationship.

If you haven’t been dating too long, watch for signs of how much he considers you in his day-to-day decisions and especially whenever he’s making long-term decisions.

He remembers things you said and did

If you catch your man asking you about something you mentioned awhile back, it’s a good indication that you’re on his mind a lot. It also shows that he’s been paying close attention to you and that it’s important to him to invest his time in your relationship.

Most men have difficulty remembering the little things, but many times this is because he doesn’t deem it very important. If a man surprises you by remembering details about your life and your preferences, it shows that he thinks of what’s important to you as important to him.

He introduces you to his family and friends

If you’ve been dating for a little while and he sees a future with you, he’ll naturally want to introduce you to the most important people in his life. This is an important step in any relationship and indicates that he plans on knowing you for awhile.

His family and friends can’t sway his opinion of you

A man who is not certain about you or a future with you will allow himself to get easily swayed by the opinions of his friends and family, be they negative or positive.

A man who is certain about you and a future with you will take his family and friend’s opinions into consideration, but he won’t really care. This indicates both that he’s mature enough to form his own opinions and that he’s already certain about the place you hold in his life.

This is a very strong sign that he sees a future with you.

In the beginning stages of dating, having the “where-is-this-going” talk can be awkward. So if you’re not quite ready for the talk but curious all the same, watch for the above signs that indicate his intentions and where he sees the relationship headed.

But be warned – a few of these signs that he sees a future with you may not be observable until you’ve been dating at least a few weeks so if he hasn’t checked all the boxes yet, give him some time.