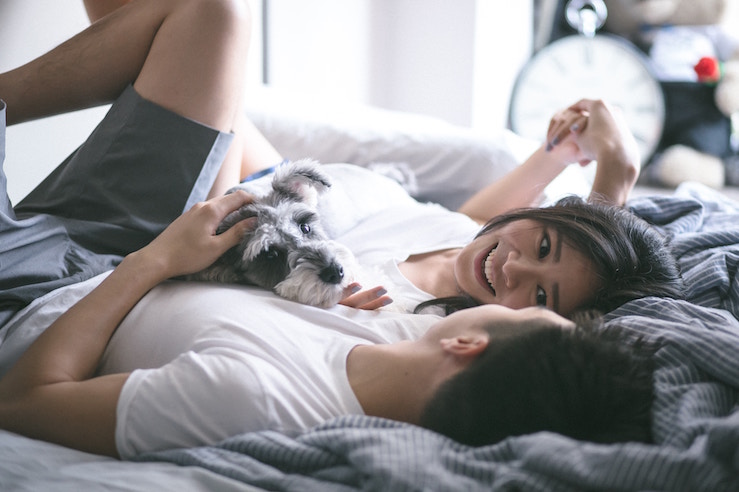 You’re spending tons of time together and both of you seem to have the “feels.” But the most surefire way to tell if he’s as into you as it seems boils down to his emotional investment.

After all, physical attraction is fleeting. And you want more than a simple, here-today-gone-tomorrow infatuation.

In that case, the thing you need to look for is how emotionally invested he is in you.

The thing is, though, that men aren’t used to wearing their hearts on their sleeve. In fact, man men pride themselves on hiding their feelings as best they can.

That means it can be difficult to tell how he might feel about us. Fortunately, there are numerous clear tells that you can watch for, each of which will make it clear he’s developed an emotional attachment to, and investment in, you.

Here are 9 tell tale signs he’s emotionally attached to you!

For most guys, they can’t help it: They focus on the things they care about. So if they’re in deep smit, you’ll know by their communication.

They will make time for you, and they will regularly call and text, sometimes for no other reason than that they’re thinking about you (though they may or may not admit that last part).

Going above and beyond

For most guys, you know what you’re getting. Standard dates, gifts on Valentine’s Day, and so forth. If he’s going above and beyond (like paying for things he may or may not be able to afford), it’s a sign of how we feels about you.

He’s invested in you, cares about you, and wants to make sure you feel cared for.

The way he looks at you

And when you’ve seen it, you can’t unsee it. There’s a particular look men have when they get something they’ve always wanted, or when they’re in love with someone — a combination of adoration, admiration, even bliss.

It’s not a look that can be faked, not even by most of the best actors, and once you’ve seen it, you don’t forget it or mistake it for anything else.

When you get that look, you know: He’s in love.

The way he lets you in

For many guys, trust is rare and hard-won. There are not many people they’ll fully let their guard down with; even as they too need this emotional connection, it’s rare that a guy will admit to needing it.

If you find he’s telling you his hopes and his dreams as well as his fears and his worries, though? He trusts you, and he’s opened himself up to you, and he’s attached.

If he’s asking for commitment, it’s because he’s sold on you as the right girl. See, here’s the thing: Most guys will tell you they aren’t afraid of commitment. What they’re afraid of is being at the wrong girl’s side.

If he’s asking for commitment from you, it’s because he has a really, really good feeling about you — if not that you’re “the one,” then at the very least that that’s a real possibility.

There aren’t many more clear signs of how a guy feels about you than that!

And this doesn’t just mean making time for sex, though that’s certainly part of intimacy. No, more than that, this means he’s willing, and wants, to make the time to really get to know and understand you, to bond with you emotionally, mentally, and spiritually.

This can be going out, but it can just as easily be time spent sitting up in bed, talking.

Regardless of how, if a man is making a conscious effort to make time for intimacy with you, that’s a sure sign he’s emotionally invested in your relationship, and wants to help it keep growing.

Another clear sign he’s invested in you is when you see him acting as if you are his partner.

This can be something as simple as making sure that your decisions are made jointly when it comes to picking a date location, or it might be more emotional, such as leaping to your defense in front of family or friends, even if they might have only been teasing.

When he sees you as his partner, he feels the need to protect you. That’s a sign of a relationship that’s growing legs, and is proof of his investment in it.

He makes you part of his community

When he starts introducing you to family and friends, it can mean one of several things. It can mean he’s trying to get their opinion of you, one he’s still forming himself.

Or it can mean he’s trying to introduce you to his community, the people who are important to him, because he wants you to be a part of it.

If he keeps taking you out to be with his family and friends, that’s a pretty good sign he wants you around for the long-term. He’s invested in you, and sees you as part of his inner circle.

This is a really clear sign that he wants you to stick with him, because if he wasn’t so attached, he wouldn’t give his family and friends the opportunity to get attached to you as well.

He’s in it for the long haul

That means he’s willing to fight with you through the rough stuff. That might be a lost job, trouble with a friend, or even working through some emotional intimacy issues in your own relationship.

All of those are natural parts of a relationship, yet many men see them as an opportunity to get out before things get too serious.

If he’s by your side through all of it, though, you know he has your back. He wants this to last, because he’s invested in you and in the relationship, and just because things get rough aren’t enough to scare him off.

All of these are great signs that he’s grown attached to you, and that he wants to be with you. When a man is emotionally invested, it means they want to see how a relationship can grow and blossom, and they want to see that progression with you.

So don’t be scared if your boyfriend is showing signs he’s emotionally attached to you. They aren’t signs of weakness. Instead, they signal love.