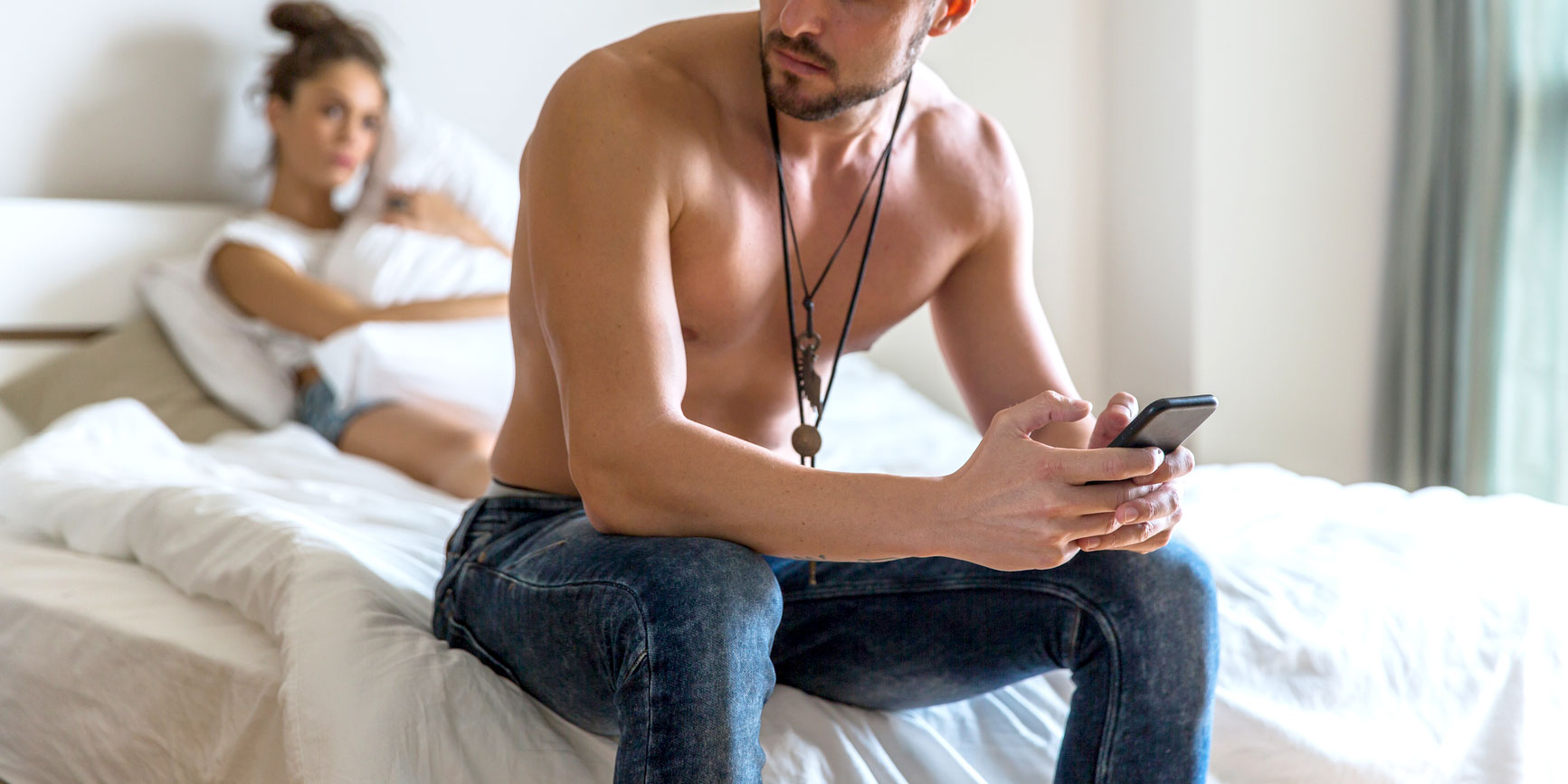 Ideally, you find the perfect man—one you can trust, one you love, one you makes your insides melt, one who values you for all that you are, one that makes you more.

But it can take you a long time to find that man, and in the meantime, it can take some searching.

And, perhaps, some suspicion. If you see enough of these signs in your relationship, no matter how new or old, no matter how exciting or tested – it may be time to start paying a little more attention, because he just may be cheating on you and sleeping with someone else.

So what signs should you be watching for? Check out this list of subtle signs he’s sleeping with someone else.

One last note of caution before we jump in: These signs don’t necessarily mean he’s sleeping with someone else. You’ll still have to do your own detective work, or, depending on the relationship you have with him, ask him.

But these signs are frequently present when a guy cheats, so keep an eye out for them. Alright, here goes:

They take their time responding to your calls or texts

This is especially concerning as a sign if they’ve historically been the kind of guy that immediately responds to your calls or texts.

Similarly, if there has never been a screen lock on their phone, but now suddenly there is, it may be that they’re trying to hide their call or text history from you.

Partners don’t hide things from each other, so be on the watch for these kind of behaviors; even if he isn’t cheating on you, odds are good you don’t have much of a future if he’s hiding from you in these ways.

Late nights and changes in plans

One of the more tell tale signs he’s sleeping with someone else is when their schedule changes unexpectedly, more often or they’re suddenly working more late nights.

Yes, sometimes peoples’ work schedule changes. This is one of those places to listen to your intuition. Has he always had a very steady work schedule, but now all of the sudden he’s regularly telling you he has to work late, that can be something to keep an eye on.

It could be that they’ve picked up an extra time-consuming project and they really are working late, but there are ways to get a feel for this. For instance, consider calling his place of work one of the nights he’s working late.

If he’s there, you know that he actually is working late—and you can tell him you were thinking about him, maybe even give him something to look forward to when he gets off work. If he’s not there, though, you know he’s lying to you.

Again, this isn’t sure proof he’s sleeping with someone else. For instance, maybe he’s lying about working late because he’s doing something else (or picked up a second job), but in either case, the fact that he lied to you should be concerning and worth further investigation, whether that’s trying to figure out what he actually does or point-blank asking him about it.

They jump in the shower immediately after getting home

Obviously, there are good reasons to jump in the shower when first home. For instance, maybe they just got back from the gym and they’re disgustingly sweaty. Or maybe they were helping a friend move. Or maybe they’re just the kind of guy who always showers after work. That’s not the sort of behavior to be concerned about.

Instead, I mean this behavior is concerning if it isn’t normal for them. And it may be a sign that they’re in a hurry to wash off the sex smell of the person they’re sleeping with off.

For other cheating men, this may be a lack of intimacy when they first get home, a need to jump in the bathroom or otherwise gather themselves before they can give themselves to you.

Unless they’re more emotionally damaged than most men I know, juggling relationships (even if one or more of them is only physical) is hard. It takes a toll.

Taking a shower or otherwise seeming strangely withdrawn when first with you can be a sign of them needing time to switch from one relationship (their relationship with the person they’re sleeping with on the side) to another (with you).

If they’ve historically been very attentive to you, your needs, and your emotions, but suddenly aren’t, that’s a pretty clear sign that they aren’t valuing you the way they previously have.

Yes, there are other possible explanations: Perhaps they’re feeling bogged down in their own issues, or have a lot on their mind, and as such aren’t as able to give you the same attention.

But it can also be that they don’t value you the same way they had, and that’s a problem, whether that’s because they’re lavishing that attention on someone else or simply pulling away.

If they’ve historically been very attentive to you, and now aren’t? That’s a sign your relationship isn’t in a good place, and you need to talk with him about what’s going on.

Maybe he simply needs to recommit himself to you and the future the two of you are trying to build together, or maybe he needs to be honest with you that he doesn’t see you in his future—but either way, you deserve better and his full attention. So if he isn’t giving you that, bring it up.

Again, this doesn’t have to be a sign of cheating or sleeping with someone else. It can be that they’re simply trying to spice things up with you, or that they’re trying to find new ways to please you.

Sometimes changes in the bedroom are a good thing—especially if you like the new moves or he finds a new way to drive you crazy, for instance.

It can even be that you notice that they’re simply less present when you have sex. It can be that he has something else on his mind, but if it’s a regular occurrence, you should consider that he may just be going through the motions—because he’d rather be sleeping with someone else, for instance.

More concerning yet for you is if they’ve previously been a tiger, completely insatiable, and no regularly have excuses or just seemingly want less sex.

While this can be the result of outside stressors in their life (for instance, if work has been absolutely nuts for them lately, they really may just be too worn down), it can also be a sign that they’re getting that appetite sated elsewhere.

Of course, there is also the possibility that they’re simply distancing themselves from you, too. If your relationship has been in a funk for a while, this is also a possibility.

They become evasive in normal conversations

If you’ve historically had an open communication built on trust, if they start to evade certain line of questions or say things like “why does it matter?” that can be a sign that they’re trying to hide things from you.

While that may not be a relationship, it sometimes is, so consider this concerning—especially if other signs are also present.

The bigger problem here is that your partner isn’t someone you feel like is truthful with you in conversations, or is hiding things from you, then one of the foundational pieces of a relationship is broken between you, and that is a problem that needs to be addressed if you are going to have a future together.

Especially if he’s historically been friendly with your circle of friends, your confidantes, and your family, this can be concerning. This means he’s either pulling away or feeling guilty, neither of which are good things, and in either case, you need to find out what’s going on.

So ask him. And trust your gut. If he tells you he’s just being feeling stressed out, for instance, and needed a chance to lay low, trust what you know of him.

He may be telling you the truth – or he may be hiding something. Either way, though, you may be surprised at how good your gut is at ferreting out the truth of what’s going on.

This is a huge red flag. If they’re suddenly grooming much more attentively than they have been—especially if you haven’t said anything about their grooming—you should wonder why that may be.

Maybe they’ve taken an interest because it seems to please you, but if that isn’t a plausible explanation, consider who their extra grooming is for. This is especially true if their below the belt grooming changes significantly.

That isn’t the sort of thing most people do unless there is a new partner that has asked them to do so.

Other signs to watch for…

While it’s doubtful you’ll find a pair of panties that aren’t yours, you may well pick up some changes that don’t fit if you keep your eye open if he is sleeping around on you. Most men are not that good at hiding it, so you’re likely to pick up on the signs.

In any case, trust your gut. Oftentimes if you are being cheated on, you will know before you know, if you know what I mean.

And obviously these aren’t the only signs you might see if someone is sleeping around on you, but they are the most common. And on the flip side, none of them are by themselves sure signs he’s sleeping with someone else.

Trust your gut if you think he might be sleeping with someone else, and pay attention to the signs you’re seeing in his behavior.

If he is sleeping with someone else, though, or you otherwise find you can’t trust him? Remember you deserve better. Living with an untrustworthy partner is a waste of your love, not healthy, and wholly unacceptable. You deserve better, so kick that bum out of your life.