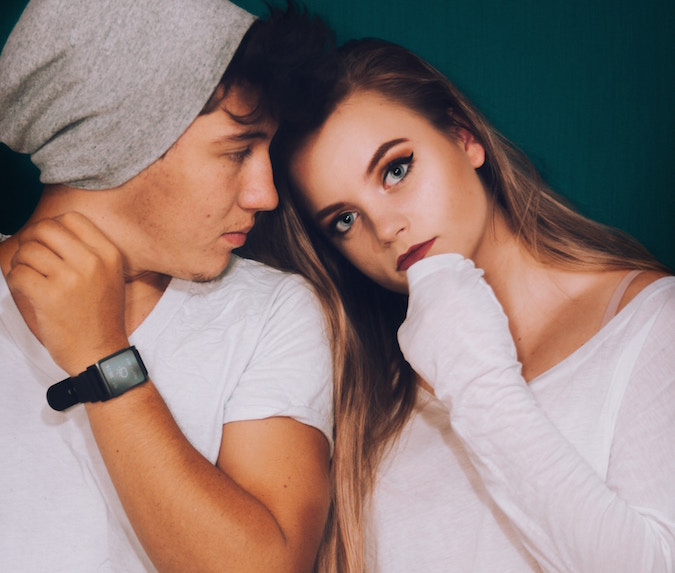 Ah, the rebound chick. We all know of this phenomenon but rarely do any of us want to actually BE it.

So, you’ve just met a great guy, and he seems super into you. And let’s be real: You’re super into him, too. So what’s the problem?

The problem is he’s fresh out of a relationship and you have the lurking suspicion that you may be his rebound chick.

If he’s freshly single when you start dating, consider that a caution sign. That isn’t to say it can’t still work out – because it definitely can! – but just that there are reasons to be cautious.

Men, far more than women, are susceptible to jumping straight out of a relationship and into a rebound. In part, this is because many men aren’t very emotionally mature, and so for most men, when it comes to confiding and being emotionally vulnerable, that isn’t something they can do with their guy friends.

Instead, that job usually falls to their girlfriend – and when they don’t have a girlfriend, that’s a void in need of filling. Voila, rebound chick!

If you’re really into him, though, you should probably figure out sooner or later whether he’s really into you – or just really into rebounding and not being alone.

The best way to do that? Short of reading his mind, you can look for these  signs you might be his rebound chick…

If he broke up with his long-time ex, or separated from his wife, within the last few months, that’s not a good sign. And the more unexpected the breakup, the more likely you’re the rebound chick.

Men generally don’t handle the medium-term after-effects of a breakup as well as women, and research suggests that a tendency toward a “grass is greener” perspective when looking back at past relationships in addition to less developed coping skills means they’re far more likely to find a new girlfriend to help them process…and in this case, that might be you.

The one exception here? Divorced men, as it can take years to finalize a divorce, which gives them plenty of time to process, meaning they’re past rebounding.

He’s always talking about her

This is a definite strong sign that he’s not over her, because if he’s talking to you about her, that means he’s still thinking about her. That might be affection, or it might be resentment, but either way, he’s not over her yet – and you’re acting more as his therapist than as his partner.

Even if he sounds genuinely angry and disgusted with his last relationship, if he’s still talking about her – that means she’s still occupying a lot of space in his head. And that means less space for you.

The breakup was sudden

If she broke up with him, and he didn’t see it coming, or if he broke up with her because of unexpected circumstances (for instance, discovering she was cheating on him), it’s far more likely that he hasn’t yet grieved the loss of his relationship, and is instead with you so that he doesn’t have to be alone with his feelings.

After a sudden breakup, most men need months of time to process what’s just happened before they can fully invest emotionally in a new relationship. If he hasn’t had that time, odds are good you’re a rebound – and one that he’ll have difficulty fully investing in.

He openly compares you to her

This is related to point number two, and yet somehow worse…because he’s dragging you into his processing. Whether he’s talking about how much you’re like her or how much different you are, the fact that he’s comparing you is a sure sign that he still hasn’t moved on.

This is a subtle sign that you’re the rebound chick and one that can be mistaken for a man who’s ready for a serious relationship.  But if his commitment doesn’t match how long you’ve been together – it’s a red flag.

This incongruence can show in extremes.

For some men, they might be talking about how much he really likes you on your second date and telling you he loves you after knowing you a week or two.

Similarly, you might note he pushes to label your relationship on social media – a way to prove to himself and others that he has value in a relationship. If you note that his sense of commitment doesn’t fit the time you’ve been together, this can be a solid sign that he’s using you as a rebound.

For other men, though, this can take the exact opposite tack, like an inability to call you his girlfriend even after you’ve been dating for months. This might be a sign that he still, in some part of his brain, anticipates getting back together with his ex, and that he hasn’t fully accepted that that relationship is over. As a result, he isn’t able to commit to you.

“I never cared about her!”

When the topic of his ex comes up, does he downplay the significance of his past relationship?

If he was with her for years, but acts as if it was no big deal only a few weeks later, you can be sure he hasn’t dealt with the loss of the relationship and is just trying to bury it, rather than process what has happened.

You know how some guys are never single? That’s a pretty good sign that he never takes the time to be alone and see himself for who he is, nor does he want to actually process his feelings.

You can be sure that he’s not going to be able to fully commit emotionally to you, especially if he’s the sort that’s always cut bait for someone else whenever things have gotten tough. And yes, this is the way quite a few guys are.

Look, some guys and gals can be in a relationship, and then later be friends.

Even in those cases, though, they need time apart after their breakup to get their lives back in order and to heal emotionally, so that they’re not still dealing with those emotions when they see each other again, and so that they can actually build a friendship, rather than the remnants of a relationship.

If you note that his ex is still in his life, and that they haven’t taken that requisite time apart to heal, you can be pretty sure that at least one of them is still pining for the other, which is not a healthy situation, nor one you want to be in the middle of.

It’s all about sex

If your new relationship is all about the physical stuff, that’s fine – if that’s what you want. Maybe the sex is incredible. If none of the romance and emotional connection is there, though, it could be because he isn’t able to give that to you, because that side of himself is still broken and healing.

If that’s what you’re looking for in a relationship, then you might need to back away for a little while until he can get himself in order again.

He’s known you for awhile, but his interest is new

If he’s a long-term friend, but has never shown any interest in you, and now suddenly does? That should catch your attention, because it could very well be that he’s simply substituting your friendship for the emotional void he feels having lost his ex.

Many men are terrible at this: They lose the woman who has been their confidant and emotionally support, and rather than give themselves time to heal, they immediately turn to the next woman they’re close to, hoping that she can step in and fill that yearning need.

And if that’s you? Uh-oh. He’s into you because you’re available, and you’re his friend, not because he wants a long-term future with you.

He tries to control you

This doesn’t always apply, but if he had his heart smashed by his ex (especially if she cheated), he may try and keep it from happening again by trying to control you.

While understandable that he wouldn’t want to put himself in a situation where he could be hurt again, it also isn’t healthy. For your relationship to have long-term success, you have to be able to trust each other, and a controlling relationship isn’t that.

Your gut tells you not to trust it

We all have amazing intuition when we learn to trust it. So ask yourself: Would he leave if he thought he could get back with his ex? If the answer is yes, you’re a rebound chick, and you know it in your gut.

Being a rebound chick may or may not be what you’re looking for. As a rebound, odds are good you’re not going to get the emotional support you need from a guy if he’s just using you for the moment.

But if you’re aware of the signs of a rebound, you can be in control of your decisions and your relationship, because you can recognize where he is emotionally based on his actions.

If you need to, walk away and give them the space to heal. And when they’re ready, you can pursue a real and meaningful relationship then if you still want to.