17 Signs He Just Wants To Get In Your Pants 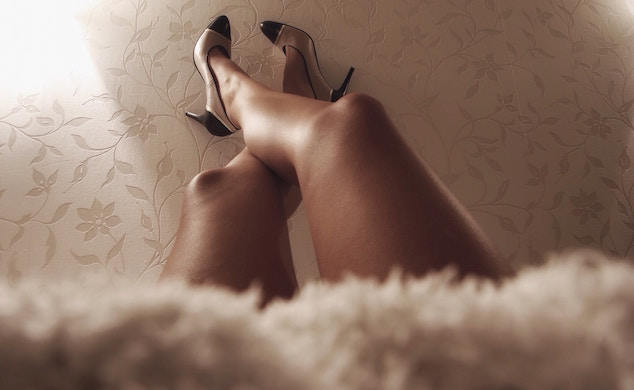 He’s been sniffing around lately and acting all interested but you can’t help but look for signs he just wants to get in your pants.

After all, this is something that most women of most ages has had to deal with.

The good news is that quite often, if a guy just wants sex from you, it’s easy enough to tell.  The more straightforward ones may even admit they’re just looking for a no-strings-attached sex partner or fuck buddy.

Other times, though, guys might not be so honest with you, because they may think they’re more likely to get laid if they tell you what they think you want to hear.

When that happens, it’s all about listening less to what he’s saying, and putting more stock in his actions.

So what do you look for when you get the feeling that this guy is trying to use you for sex? Here’s 17 signs he just wants to get in your pants and isn’t looking for anything more!

When a guy is really into you, they’re communicative. When they just see you as sex, though? Not so much.

He’ll be communicative when he’s looking to get laid, and otherwise disappear when he has other things going on, because he doesn’t value his communication with you except as a means to an end, namely sex.

So if he disappears on you regularly , you can guess how he values you: He just wants to get into your pants.

He doesn’t put in an effort

Similarly, if when he was first hooking up with you he put in a bunch of work to impress you, but doesn’t feel the need to do that anymore? He sees you as a way to get laid, not as someone he’s still trying to woo.

That’s a pretty clear sign it’s about the sex for him, and not the relationship.

If he regularly cancels on you, it’s because you aren’t a priority. Maybe that’s a bit blunt, but if he just sees you as miss sexy fun time, and not as someone he otherwise values in his life, he isn’t going to be there except when he wants to get laid.

And you have options. Feel free to tell him that you have certain expectations of him if he wants to stay in your life; there’s no reason you have to put him with his crap, and if he’s not willing to put an effort into being with you, feel free to cut him loose.

He only cares about getting off

Look, if he sees you as a means to an end, and just wants to be with you so he can get off, odds are good he’s not even going to be a very good lay for you. After all, that’s one of the key characters of men who suck in bed.

A romp in the sheets that’s over in minutes is good only for him, and is a pretty clear sign he doesn’t care about you.

If, on the flip side, he’s all about finding out what you like, what drives you wild, and makes an effort to make sure he’s doing what he can to satisfy you?

That’s a sign he might have feelings for you. So pay attention to how he is a lover. Most guys are quite capable of rising to the occasion and taking care of their woman; whether or not they make that effort is a pretty clear sign of how they feel about you as a lover and a person.

He isn’t open with you

Lots of guys get a reputation as being closed-off emotionally, and perhaps with good reason. But just as often, that’s an act. If he really wants to be with you, he’s going to make the effort to connect with you emotionally and build a relationship.

If instead, though, you find that when you try to connect emotionally he just pulls away, it can often be because he isn’t interested in a relationship, or the vulnerability or trust that a relationship requires, because he’s just there for sex.

Lots of “friendly” women in his life

If you notice that he keeps explaining all of these other women in his life are “friends,” that might actually be the case. But it’s just as likely that those are other women he’s either slept with before or wants to sleep with in the future.

Having friends of the opposite gender is certainly possible, but if you note that all of these female friends keep showing up in what seem like inappropriate ways for what you know friendship looks like, it could also just as easily be that he doesn’t seem them as friends — but just calls them friends when he’s with you because he likes having sex with you, and doesn’t want to ruin that.

As always, pay attention to his actions, not his words.

His dates are always last-minute

When a guy really wants to be with you, he wants to make plans to be around you and with you in advance, because it’s something he looks forward to.

If he just sees you as a way to get laid, though, he’s not going to plan that a week in advance. Instead he might text you that day (or maybe the day before) to see if you can do something.

He hasn’t added you on social media

If he hasn’t added you to his social media accounts, it could very well be that he’s hiding something. If he’s really into you, he’ll likely try and add you on his social media networks immediately.

If he just wants sex, though, he might not — quite possibly because he doesn’t want you to see other images or connections that might give you an idea that you’re not the only woman in his life.

He might even say something like how he doesn’t add people he’s dating, but odds are good this won’t pass the smell test, so trust your gut here; he’s likely playing the field, and just trying not to get caught.

His stories don’t add up

We can’t keep straight what we’ve said when or where or to who, and if you’re paying attention, you’ll note some things just don’t feel right or fit right. That isn’t a good sign that he respects or trusts you. Instead, he’s just trying to use you for sex.

You get a vibe

Look, we all have pretty good intuitive bullshit meters, whether we choose to listen to them or not.  If you get the vibe that he’s a skeezeball or playing the field? He probably is!

I was on several sports teams in college. I knew who the sketchy guys were even before they shared all their conquest stories at practice, and most of the smart women I knew got the exact same vibe from those guys.

It might just be a feeling, or it might be the lines he uses, or it may even be the way he checks out other women even while he’s with you — but you know. So if your gut tells you he’s trouble, listen to it!

His phone is off-limits

Pay attention to how he keeps his phone when he’s around you. If it’s upside-down or otherwise out of reach, he might be trying to hide something. If he flips out if you playfully reach for his phone, think about why that might be. W

hen guys are playing the field, they have to keep their ladies from finding out about each other, and the easiest way to do that is to protect their phone.

He always wants to stay in

Similarly, if he always wants to stay in, think about why. Is he afraid someone will see the two of you together? Maybe there’s a legitimate reason — like he can’t afford to go out, for instance — but this can definitely be a warning sign.

If his natural habit when you ask him something is to deflect, that’s not a good sign.

Obviously, for many guys, it takes us time to trust the woman we’re with and open up, but trust your gut on this: If it feels like he’s hiding things, he probably is.

He only sees you at strange times

You don’t get consecutive nights, or the full weekend. Instead you might get a quickie during the week, or a 2 AM bar close booty call.

Those are clear signs he’s just into you for sex. This is especially true if he routinely declines to see you on weekend nights, Friday and Saturday, since if he’s just trolling for sex, those are the best nights for him to pick someone up at the bar.

If you’re a known commodity, but he’s out looking for someone else, that’s a pretty clear sign he’s just looking for sex. It doesn’t get much more obvious than that.

You haven’t met his friend

Or if you have, it’s only been in passing, a chance for him to show off the hottie he’s sleeping with. If he values you and sees you as a relationship material, he’s going to want his friends to weigh in and get to know you.

If he just sees you as a sexy plaything, though, there’s no reason for him to socialize you into the group.

Look, texting is easy. But if you only ever get texts from him, that can be a sign of a great number of troubling things.

He might be copying-and-pasting his texts to any number of potential hook-ups. He might be texting while he’s with someone else.

The truth is, when it comes to really getting to know someone, talking on the phone is far more effective. If he only ever wants to text, that could be a sign that he’s interested in your body, not in you.

This can be both short-term (making plans a week in advance, for instance) or longer-term. The truth is, he’s not interested in a relationship; he’s interested in sex.

And if that’s all he sees you as, he’s not going to want a relationship down the road, either.