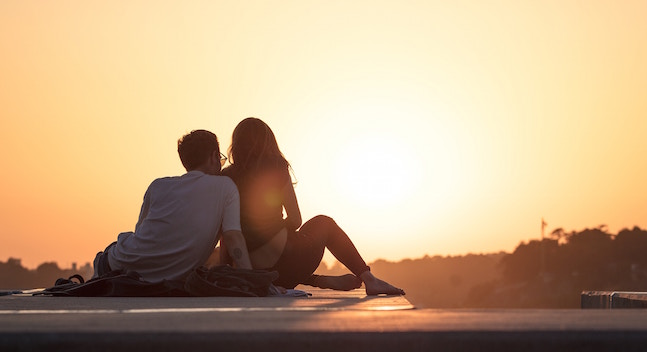 On the hunt for tell tale signs he wants to be exclusive? You’ve been seeing each other for a few months, but haven’t worked up the nerve for “the talk.”

But, short of having the talk, what if there are other ways to tell his intentions, or if he wants to be exclusive?

There are. Check out these 17 signs he wants to be exclusive with you. Of course, you should probably still have that talk – after all, clear, consistent communication is one of the hallmarks of a healthy, sustainable relationship – but if these signs check out, you’ll have a much better idea of where that talk will lead.

He wants you to be part of his support network – just as he wants to be part of your inner circle. Similarly, meeting each other’s family is a clear sign that you’re both looking forward to a potential future together.

In both cases, it means he’s thinking of the two of you as a couple, rather than just of himself as an individual.

He calls you his girlfriend

Pay attention to how he introduces you. If he calls you “his girlfriend,” that’s a great sign. If he refers to you as his friend, though? Not so much.

Calling you his girlfriend is his way of claiming you as his one and only partner; he’s not interested in any other women, and he’s publicly declaring it so.

Tinder, Match.com, eHarmony — if he’s taken his profiles down, you know he’s taken himself off the market. After all, he doesn’t need to look for someone else to spend his evenings with, because he’s busy spending them with you instead.

If wants to spend both Friday and Saturday night with you, it’s a pretty clear sign he wants to be exclusive.

When someone’s still playing the field, they’ll keep a weekend night open for other potential dates or hookups.

But when they’re already planning to spend both nights with you? You can be sure you’re the only one they want to be with.

The women in his circle know

One of the most subtle but obvious signs he wants to be exclusive is when introduces and talks you up to his female friends.

Pay attention to how he talks you up with his female friends: Some guys will do this as a way of bragging, and other guys will do it to try and make the lady they’re interested in jealous.

You spend your nights snuggling

Look: Most guys are terrible at snuggling. We don’t know how to do it, it feels awkward, and most often, we’d rather sprawl out. If he’s willingly cuddling with you—and not because you asked—it’s because he feels safe with you, and wants to let you into his life emotionally, not just physically.

That’s a pretty damn strong sign that he wants just you, for you, in his life.

He brings up a future together

If you find him hinting that he might want to live together, or otherwise sees you two together in the future, that’s a really good sign that he wants you for his long-term partner, and only you.

If he’s talking about those things with you, you can be sure he’s thinking about a longer-term future, including marriage and your potential as a wife.

He has Facebook photos up of the two of you

Even if he hasn’t changed his relationship status on Facebook yet (and if he has, that’s definitely a good sign!), numerous photos of the two of you as a couple means he wants to be seen as claimed by you.

He tells you if he hears from an ex

As a result, he’s not going to try and sneak anything by you with his ex.

Hearing from his ex is, for him, just another reminder of what a special thing he’s found in his relationship with you. And if he’s then telling you about that?

That’s a very clear sign that he just wants you, and that he wants you to stick around, because he’s displaying both emotional vulnerability and trust with you.

If he’s showing off his relationship—holding your hand, kissing you, in front of family, friends, co-workers—then you know he’s proud of it. He wants people to know that he’s yours, and your his. That’s a sign he doesn’t want anything else—just you.

He spend his birthday and romantic dates with you

You have a drawer at his place

That’s a clear sign he’s not having anyone else over—he’s asked you to claim your dominion of his space when he has you keep stuff at his place.

He tells you “I love you”

And I don’t mean to get sex: If he’s telling you “I love you” in everyday contexts, like snuggling on the couch, or just in regular conversation, even in text, you know he means it, rather than just trying to get something from you.

His ex knows about you

Obviously, this only applies if his ex is still somehow in his life; some people prefer a clean break.

But if his ex is still somehow in his life, whether because of shared friends or other circumstances, if you see him making it clear to his ex that he’s yours, it’s a clear sign he considers himself claimed by you, and wants to be with you only.

He’s there for you when you’re sick

If he’s there to make you chicken soup, you know he’s smitten, and only with you. Most guys are terrible at caring for people in their weakness, so if he’s there to nurse you back to health, that’s a clear sign he considers you a long-term keeper.

He’s given a key to his place

That’s a clear sign he wants to stop by any time, and is something he’d never do if he were seeing someone else on the side.

Instead, he considers his place yours, and he wants you to see it as a shared home for the two of you, similar to how we sees the two of you as a “we.”