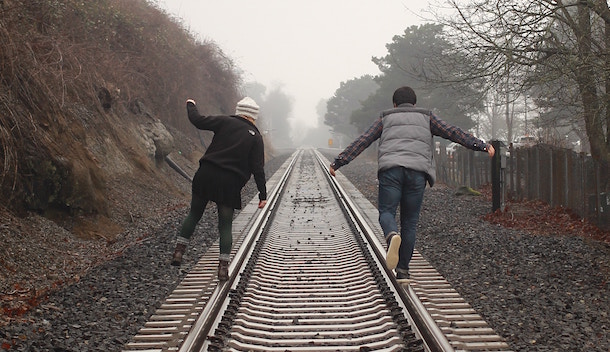 When it’s a long-term relationship ending, it can be even harder.

And, rather than dealing with that pain, many of us choose to bury ourselves in another relationship: the rebound.

Whether you’re the one jumping into a rebound to avoid dealing with your pain or your new girlfriend or boyfriend is, it can be a problematic way to start a relationship.

In fact, more than 65% of rebound relationships fail within the first six months – often because whoever is rebounding isn’t actually psychologically prepared to be in a relationship again, having not yet dealt with the death of their previous one.

When a relationship has failed, it’s important that we take time to process the lessons we can take from that failure. Most often, though, when someone jumps right into a rebound, they haven’t taken that time, and as such, haven’t actually processed the breakup, or what went wrong, so they can avoid making those same mistakes in the future.

Without introspection and reflection, you may actually be doomed to make the same mistake in your current relationship, the rebound.

What you can do: Make time to process why the previous relationship didn’t work. Then, apply those lessons to the current relationship, so that you have a better chance of not being part of that 65% failure rate.

Often part of the reason someone is in a rebound relationship is vulnerability, having just lost one of the people they were closest to from their life.

As a result, though, this means that people entering rebound relationships may not have their guard up against partners who might take advantage of them, or who are looking to manipulate them into getting what they want.

In the emotionally fragile place that comes after a breakup, rebounders may be willing to give in in circumstances where they would normally hold their ground – which can lead to later resentment and mistrust, damaging the relationship’s long-term future.

What you can do: Be aware of that extra vulnerability, whether you’re the one rebounding or your partner is, and protect emotions and trust. This can be more difficult than in normal relationships, as you have to balance both protecting yourself and opening up enough to develop trust, but it isn’t by any means impossible.

Related to that vulnerability, rebounders are often ripe for abuse, whether emotional abuse or drug or alcohol abuse, frequently under the guise of “letting loose.”

With that comes poor decision-making, including unsafe sex, risky behaviors, and more if you and your partner aren’t careful.

What you can do: If you are the rebounder, you’ll need to be careful to avoid situations that are emotionally charged and may make it more likely you’ll make poor decisions.

If your partner is the rebounder, protect them from their tendency to let loose – they need you to be stable and protective as they work through their emotions, rather than an enabler that they may blame later.

It isn’t really you

As rebounders deal with their broken hearts, they may try to be someone they’re not – perhaps instead choosing to try and be someone they wish they were, or someone they think might have had more success in their previously failed relationship.

If they are acting in this way, though, it can only last for so long.

What you can do: Be there for who they really are – and stress that you accept and care for them as they really are, rather than who they’re trying to be. Help them realize they can be themselves with you, rather than projecting this idea of someone else.

They need therapy, not a relationship

Of course, part of rebounding is the inability to face what went wrong in the previous relationship, instead choosing to rush into another relationship.

If you note that your partner is still clearly not over their ex, or is using you as a therapist to process what happened, that may not bode well for your long-term future.

What you can do: Be there for them, but also suggest that they see someone who can help them process. After all, you want to be their partner, not their therapist. So support their need to process, but help them do so in a healthier way than using you as their therapist.

The truth is that for many people coming out of a bad breakup, a rebound is completely natural, and as long as you’re aware of the potential pitfalls, can be quite rewarding.

In fact, sociological studies have found that your odds of a successful relationship are no better, nor any lower, after a previous relationship.

In fact, in several studies, researchers have found that people dating new partners after a previous relationship feel better about themselves – both feeling more desirable and having fewer residual feelings toward their ex -than people who don’t begin dating again after the breakup.

People who date sooner after a breakup also show higher levels of well-being, self-esteem, and trust than those who wait. In other words, a rebound can be good for you!

So yes, rebounds often do fail. But they hardly have to, and if you can address any of the potential issues that can arise naturally in a rebound relationship, your new relationship has as good a shot at long-term success as any!