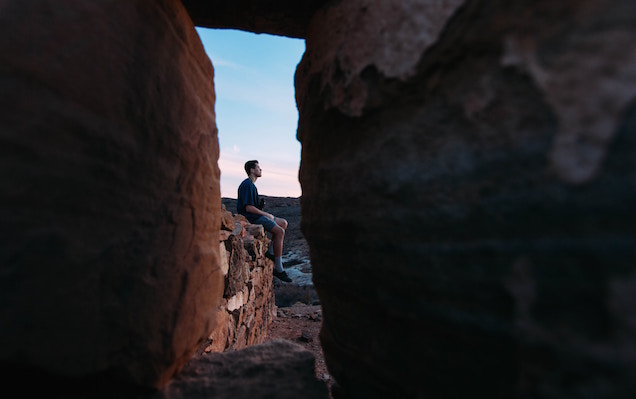 By the time you start looking for tactics on how to get an emotionally unavailable man to open up, you’ve already tried everything in your arsenal.

And still, it feels like pulling teeth every time you try to get him to open up and connect with you.

It almost feels like there’s nothing you can do to wheedle and coax him into a fulfilling emotional connection.

The short (unfortunate) reason why it feels so impossible is that it probably is. After all, emotionally unavailable men are that way in the first place because they don’t know how to access their feelings, much less share them.

If you are able to do so, it’s extremely difficult, and requires very careful navigation, and even then, isn’t by any means guaranteed to work.

Alright. Are you sufficiently warned off? Because again, the short answer is that you probably can’t get an emotionally unavailable man to open up, because most likely he simply isn’t capable.

But, if you’re still convinced you need to try, take it from me: The worst thing you can do is make the mistakes most women make in trying to get their emotionally unavailable man to open up, and as a result, inadvertently push him away.

So listen carefully to the suggestions I have below, and best of luck!

First, appreciate how he currently expresses himself emotionally. For many otherwise emotionally unavailable men, this is very different that what women expect when they think of emotional response.

For instance, many women naturally talk about their feelings. This is how they process and work through their emotions. For men, however, this can be absolute torture, as many of us would much prefer to work through things in silence, or via physical activity. (Yes, sometimes that means burying it, which isn’t healthy, but that isn’t always the case.)

In any case, though, expecting your man to express himself emotionally in the way you would isn’t fair to either of you. And pressuring him to talk about how he’s feelings can often make things worse for me who are emotionally unavailable, as they don’t know how to access those feelings very readily.

As a result, you’re essentially setting them up to fail, which generally isn’t considered a recipe for success.

Instead, if you want me to grow and learn how to be able to open up to you — and again, I caution you that for many emotionally unavailable men, this may never happen — you have to give him space and time to process his feelings as he knows how. This may well be in silence, which could very well be the exact opposite of how you normally process your emotions.

As we’ve discussed previously, helping an emotionally unavailable man learn to express his feelings means giving him time and space. Yet, as his partner, it may well be your natural inclination to try and push him forward.

Resist that urge. If you push him, it’s going to feel either like you’re pressuring him, like you’re nagging him, or both.

When you push him to do something he doesn’t know how to do, or may not want to do, it feels to him like a trap, and may well do more to push you apart than bring you together — the exact opposite of your goal of helping him open up to you.

So hard as it may be, don’t try to make your guy talk about his feelings.

Instead, do everything you can to make it a safe space, so that when (and if) he’s ready to talk about his feelings with you, he can.

Given that he naturally has a really difficult time connecting with his feelings, your ability to help him feel safe can make a huge difference; pressuring him, on the other hand, can make something that is already tremendously difficult for him unfortunately even harder.

Use humor and positivity

Both of these things can help ease the pressure he may feel to try and share his feelings with you, which may in turn make it easier for him to open up. Remember, it may well be that he wants to open up with you, but just doesn’t know how.

In that case, helping him feel at ease is key, and for many men, humor is a great way to put them at ease. Talking seriously about feelings, on the other hand, can make men who already struggle with their emotions feel even more ill-at-ease.

Recognizing that this is difficult for them, keeping things lighthearted can help them open up if they’re ever going to be able to do so.

Again, though, keep in mind that many emotionally unavailable men may never be able to open up, no matter how hard you work at making them feel at ease to explore their feelings.

After all, if they’ve made it this long without really ever learning to address their feelings, there’s no guarantee they’ll ever be able to do so in the future.

That can be a tremendously difficult thing to hear, so if you hear nothing else, please hear this: It’s not your fault. Your partner’s emotionally unavailability isn’t a reflection on you, not in any way, shape, or form. And whether or not you’re able to help them open up is likewise not a reflection on you.

So please, be as gentle (or even more so!) with yourself as you are with your partner. Learning to deal with emotions, especially the unavailable emotions of your distant partner, is hard, hard work! So be gentle, and best of luck!